Christmas makes no exception when it comes to traditions in Romania, and the regions of Maramures and Bucovina are probably the best places in Romania to spend Christmas, for tourists, but also for the locals. The people living in these areas are always proud to wear their traditional winter costumes, prepare only the traditional dishes and respect very strict all the Christmas traditions.

Christmas makes no exception when it comes to traditions in Romania, and the regions of Maramures and Bucovina are probably the best places in Romania to spend Christmas, for tourists, but also for the locals. The people living in these areas are always proud to wear their traditional winter costumes, prepare only the traditional dishes and respect very strict all the Christmas traditions. 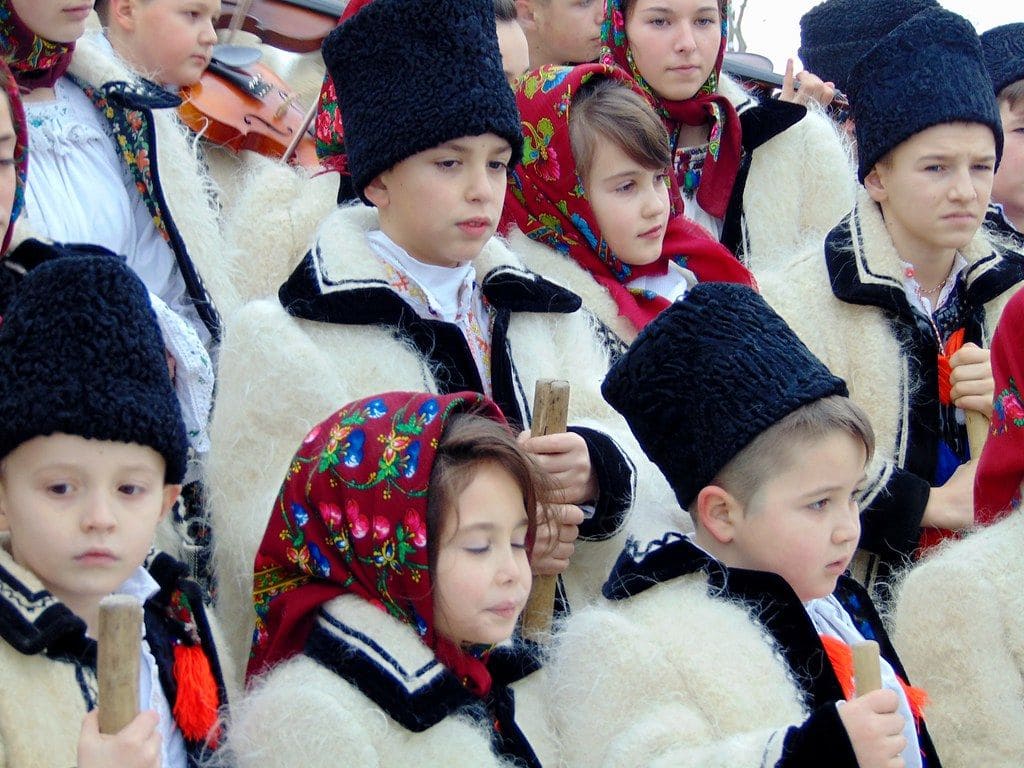 Celebrating Jesus’ birth is a moment of being together with the family first. Most of the locals would spend Christmas at home surrounded by family on December 25 and 26. Though, the Christmas season starts earlier, after November 14 with the Christmas fast. According to Orthodox religion, which includes nearly 90% of Romanian population, during the fast people should not eat meat or animal products, as part of the process of body purification. People go to confess and also the Holy Communion is part of a soul cleanse before Christmas.

The first important tradition is on December 6, when Saint Nicholas is celebrated, a very popular saint for children especially. Kids wait for “Mos Nicolae” hoping he will fill their cleaned boots with presents on the night before December 6. Most of the kids though get their presents already by bed time on December 5, but the real tradition says “Mos Nicolae” comes only after they went to sleep.

Saint Nicholas would mainly bring sweets and chocolates to the kids, while right after this holiday, all the kids have to start writing the IMPORTANT letter to Santa. Then the letter is left by the window so Santa can get it and prepare for Christmas.

Another tradition before Christmas, which is taking place all over Romania and especially in the rural areas, is the Ignat or Saint Ignatius Day on December 20, when the pig slaughtering is taking place. You hardly ever meet a Romanian fellow that ever missed for Christmas the traditional homemade sausages, the cabbage rolls or other specialities, all of these made from or with pork meat. All this food is accompanied by the local moonshine “tuica” or “palinca” in the northern parts of the country. For dessert the homemade cake “cozonac” is the famous one, which is pretty similar to the Italian panettone bread, but more tasty for the Romanians. Romanians still go in large numbers to the church service on Christmas Eve but also on the first Christmas day. Some very talented people would sing the carols which makes the service special.

The Christmas celebrations start on Christmas Eve, December 24, when people are expecting the cheerful children to knock on their doors and sing the carols, telling the story of Jesus Christ’s birth. The children get rewards in homemade cakes, fruits or candies, but also money sometimes. The best place to witness the carol traditions for tourists is within a village in Maramures or Bucovina region where the whole group of children dress in their traditional costumes.

For a while now, the Christmas markets have become quite popular in Romania too, especially in the medieval cities Sibiu and Brasov which are part of Transylvania region. Due to their rich history related to the Saxons living in these cities for over 700 years, they are very often compared to the famous Christmas Markets in Germany.

In certain parts of Romania, there still exist some special rituals like the “Capra” (the goat) and the “Ursul” (the bear) ones. These are some theatrical shows, where people dress up like goats or bear-like coats and they sing and dance on the streets. The “Capra” and “Ursul” performers are usually accompanied by a drumming band of unmarried men. All these performances last from Christmas up to New Year’s Eve.

On December 25 and 26 the whole family gathers around the Christmas tree, opening up the presents from Santa. Christmas along with Easter are the two most important holidays for Romanians, seen as a celebration of peace and joy, when all conflicts disappear and everyone is enjoying family being around.

December in Poland. First snow or second. Early dark or earlier. Lights and warmer atmosphere at homes. Children are happy because they receive gifts twice.

What are Croatian Christmas Customs?

It’s Not a True Christmas Season in Croatia if You Don’t Have Thousands of Nervous Women Baking and Cooking For Days in a Row!