The 8 Best French Attractions in London

It’s official: London is France’s sixth largest city. And that’s according to Emmanuel Macron, no less. The ‘entente cordiale’ might have been a shaky affair throughout history, but it has shaped London as a city. So it’s no surprise that there are French attractions all over town.

An estimated 250,000 French citizens now call London home. They enrich the capital the way butter enriches brioche. And, being French, they won’t settle for less than the best. So, let us take you on a tour of the most quintessentially French attractions in Londres.

LET’S BEGIN WITH THE HISTORIC SITES AS OUR APERITIF. THEN ONCE YOU’VE WORKED UP AN APPETITE, IT’S ON TO THE MAIN COURSE OF CUISINE. THEN WE’LL SWEETEN THE DEAL WITH A DESSERT OF CULTURE.

House of the Institut Français

South Kensington is traditionally the heart of French life in London. It’s where you find cornerstones of life like the Lycée – the historic French school – and the Institut Français (the French Institute). The Institute itself was set up in 1910 to promote French culture, and it proved so successful that they needed extra accommodation.

After the First World War Baron Edmond de Rothschild donated a building so its members had somewhere to stay. Appropriately, they called it the Maison De L’institut De France A Londres, or the House of the French Institute.

The original was badly bombed in the Blitz during World War Two, so today the residence is here in Queens Gate. But it still plays home to researchers and students while they’re in London. 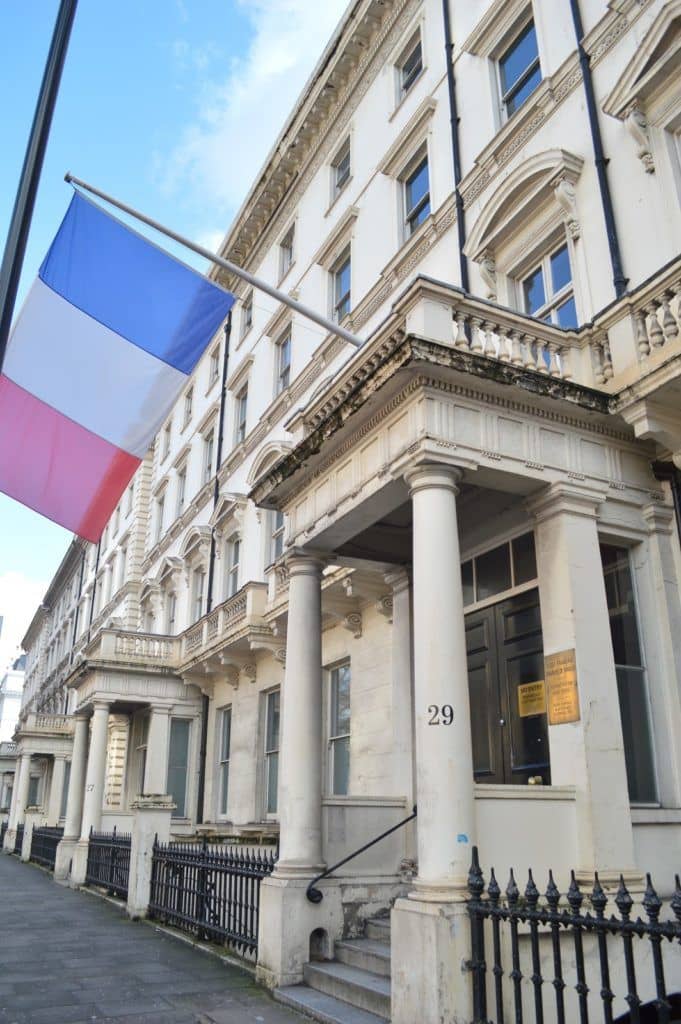 The statue of Charles De Gaulle

This monument to the legendary French statesman and military leader stands near the former headquarters of the Free French Forces at 4 Carlton Gardens (featured at number 4 on our list). This part of London was where the government-in-exile of France operated between 1940 and 1944.

The bronze statue shows de Gaulle wearing the uniform of a General de Brigade, and with one palm curiously raised as if he’s beckoning to a battalion of soldiers.

It’s notable that the fundraising effort for this monument was organised by Winston Churchill’s daughter, despite the complicated relationship between the two men.

By contrast, in his fight to free France de Gaulle used the most quintessentially British of institutions, the British Broadcasting Corporation. As a result his frequent radio addresses became a rallying cry for French men and women who objected to the Vichy regime and the armistice with occupying German forces:

I call upon all Frenchmen who want to remain free to listen to my voice and follow me. Long live Free France in honour and independence!

The BBC was founded in 1922 to educate, to inform and to entertain the British people. It’s still a vital component of British public life. Sadly you can’t tour the interior of the iconic Broadcasting House, where de Gaulle made his speeches, for security reasons.

However, the caffee is open to the public, and it has a great view of the entire newsroom as it broadcasts live across the world.

Tour Guide Tip: If you’re lucky, you might even see history unfolding in front of you. 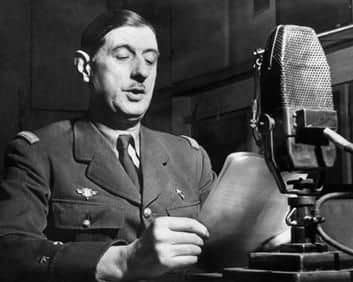 This is where General De Gaulle set up the headquarters for the Forces Libres Françaises (FFL). From here he co-ordinated the fight to restore the freedom of France.

Fittingly John Nash, the architect of this building, was influenced by the work of the Frenchman Ange-Jacques Gabriel. (Bonus trivia: Nash designed Buckingham Palace.) While it’s home to a commercial law firm today, there’s a commemorative blue plaque on the building as a symbol of its importance.

South Kensington is full of restaurants, and you can’t throw a stone without hitting a Parisian-style cafe or patisserie. However, for French dining with a difference, may we recommend Japanese French restaurant L’Etranger on Gloucester Road?

“L’étranger” translates as “the foreigner”, and that’s because head chef Jérôme Tauvron combines the classical French traditions of gastronomic perfection with the best elements of Japanese cooking. For one of London’s most luxurious French attractions, it’s hard to beat.

It’s pricey, but absolutely worth it. After all, what could be more French than to spend money and time on living well, even if you do it in London…

A brasserie is typically a relaxed style of formal restaurant which serves classic French dishes, and celebrated Frenchman-in-England, chef Pierre Koffmann, says there’s only one example in London: Brasserie Zédel.

Its plush staircase acts as a portal out of the souvenir shops of Piccadilly, and the present. Thus, you emerge in its grand dining hall, decorated in classic Parisian 19th century style. All the classics of French cuisine are on the menu at reasonable prices, but in a nicely opulent setting. You don’t find gilded marble columns and crisp white tablecloths as often in London as in France – dommage.

La Page was set up in the heart of South Kensington in 1978, which means it’s the oldest bookshop in London to sell books exclusively in French.

It’s ideally located near the Lycée Charles de Gaulle, the French Consulate, and the intellectual delights of the Victoria & Albert Museum and the Natural History Museum.

AS A RESULT, THE SHOP IS A RITE OF PASSAGE FOR LONDON’S FRENCH RESIDENTS, FOR TOURISTS IN NEED OF A GOOD BOOK, AND FOR LONDONERS IN LOVE WITH ALL THINGS FRENCH.

Soirée Pompette is a monthly variety night that takes place in a charming cabaret hall on London’s Exmouth Market. Your host for the evening is Miss Pompette; the red-cheeked ‘accordion-playing’ coquette.

Each month there’s a different bill, from artists and singers to acrobats and magicians. Sometimes there’s even a game of lotto (that’s bingo to you and me). The difference being that everything is in French: the acts, the staff, the drinking. It’s all wonderfully reminiscent of that teenage phase you went through when you thought everything French was très chic. Except this time around you’re encouraged to smile.

The audience is a great mix of people, from those who speak no French at all through to the actual French. As French attractions in London go, it’s deliciously eclectic.

SO, THE TRICK IS TO SHRUG YOUR SHOULDERS – THAT MOST GALLIC OF GESTURES – AND PLAY ALONG. C’EST MAGNIFIQUE!

Let us know how we can deliver a personalised tour of the French delights of London. Eclairs, Sartre and de Beauvoir, and the Impressionists: we can include them all in tour tailored to your interests with Totally Tailored.

Is your next vacation in Budapest or Hungary? You hit the right place for some great ideas from our local experienced private tour guide!

Slovak capital Bratislava is a perfect destination to discover the turbulent history of the 20th century in Central Europe.